Green Island is an easy dive site popular for its many grey nurse sharks that live around the island.

Green Island is situated just north of Smoky Cape Lighthouse and south of Gap Beach inside Hat Head National Park and can easily be seen from the Lighthouse car park looking north. The island is only a little way off the shoreline - unfortunately difficult access from the mainland means the dive site is only accessible by boat!

The most popular part of Green Island for diving is the northern and eastern sides as this is where the overhangs, ledges encrusted with colourful sponges and rocky reef provide a protective habitat for a wide variety of marine creatures. Edged by sand the reef hugs the island as you swim or drift south (see below). Explore the boulders where cuttlefish, blind sharks and wobbegong sharks lie, check out the overhangs where you may find a resident resting loggerhead or green turtle, large black sting (bull) ray or very large wobbies. We always recommend taking a torch as there are so many critters hiding in the walls or in amongst the boulders - juvenile lionfish, myriad varieties of nudibranch, moray eels, tiny yellow box fish.

But don't forget to look up and around as divers can sometimes be treated to sights such as very large shovel nose sharks/rays out on the sand and spotted eagle rays flying overhead (these are often also seen right on the southern tip of the island where the wall of the island becomes more sheer and there are two very narrow gutters). Of course Green Island is also known for its fish - large schools of colourful tropicals and temperates. You are more than likely to see small fiddler rays especially on the sand edge of the reef, plus dusky flathead, bream, yellowtail, southern fusiliers, leatherjackets, eastern blue wrasses, luderick and morwongs. Look out too for the schooling benito, jewfish and kingfish plus of course the Grey Nurse Sharks.

Since 1 December 2002 Green Island is (in addition to Fish Rock) a Critical Habitat for Grey Nurse Sharks which will hopefully assist in the protection of these magnificent but threatened creatures. However even without spotting one of these creatures Green Island is an amazing place.

This dive is often done as a drift dive as there is usually a north to south flowing current here and we find it more enjoyable and safer to plan a drift dive with our boats picking the divers up off the southern end of the island - this dive plan has ended up making one of Ally's dives at Green Island something very special as she and her divers where treated to underwater sights of a female humpback whale with two juveniles.

Green Island is excellent alternative to the dives at Fish Rock, and is often requested by our regular divers - dive it and you'll see why! If you spend a surface interval here do keep an eye out for the majestic eagles that use Green Island as a resting place and/or look out over the ocean. 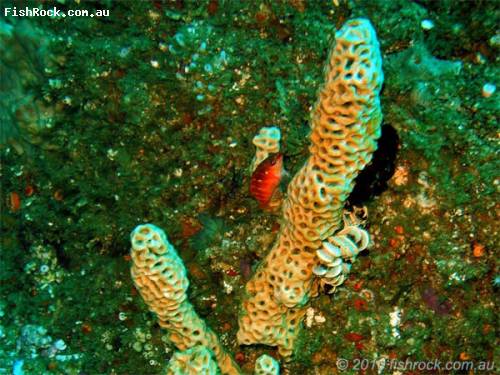 Green Island is located just north of Smokey Cape Lighthouse, and is only a short distance from shore. Rocky reef surrounds the island which is alive with a huge variety of fish, large rays, turtles and grey nurse sharks. The dive site has an average depth of 14 meters, with a maximum depth of 18 meters.

Green Island is a Grey Nurse Shark critical habitat site. Divers can photograph these graceful sharks as they cruise through the walls of fish and are commonly seen gathering here in large numbers. On a normal dive you can see dozens of very large drummer, hundreds of bream of quite good size, giant dusky flathead, thousands of yellowtail, large schools of Red morwong and friendly local black fish, also known as Ludrick. It is a great dive site, especially for the second dive of the day.