Diving Fish Rock Cave means entering a wicked, often shark-filled cave, for a length of 125 meter and exiting on the other side of Fish Rock.

The only true ocean cave dive in Australia is running 125 meters right through Fish Rock which lies two kilometers south-east of Smoky Cape, South West Rocks. Fish Rock Cave is home to a completely unique ecosystem. The temperature inside the cave is always at least one degree warmer than the surrounding ocean and the water is always clear. Although the Rock is usually prone to current, it is this current that brings the nutrients to the area and attracts the fish life. It is easy to plan your dive to minimize or take advantage of the current.

The shallow entrance of Fish Rock Cave at a depth of 12 meters is a large naturally lit cavern fringed by pink gorgonian corals and teeming with enough life to fill an entire dive. Throughout the year, Grey Nurse Sharks rest in the shallow entrance of the cave, which is an awesome diving moment for even the most experienced diver! This also presents an unparalleled photographic opportunity for novice and experienced photographers and we offer a range of film & digital cameras available for hire. You can even go up into the bubble cave and talk to your dive buddy while being five meters underwater!

The deep entrance to Fish Rock Cave is at a depth of 24 meters. During certain months of the year Grey Nurse Sharks congregate in the deep gutter offering photo's of multiple sharks at once. Grey Nurse Sharks can be seen at Fish Rock all year round. You can expect to see resident black cod, large wobbegong sharks, black rays and giant cuttle fish before ascending up one of the two chimneys into the main section of the cave. Fish Rock is a critical habitat site for the Grey Nurse Sharks, which can be found here in large numbers most of the year. Around the island the depth varies on average between 15 and 30 meters and deep gutters form perfect aggregation areas for the sharks and other marine creatures who reside here.

The western fringe of Fish Rock is washed by the currents that bring the diverse range of marine life to the area and you can expect to see heaps of fish, turtles, moray eels and friendly blue groper. The eastern side of Fish Rock is spectacular. Sheer walls plunge to an average depth of 30 meters in an area that is rarely affected by current. Boulders the size of small houses line the sea floor and are home to large wobbygong sharks disguised amongst clouds of bullseyes. On the northern side of Fish Rock a pinnacle rises 30 meters from the sea floor to within 7 meters of the surface. This is one of the best dives at Fish Rock and is home to turtles, Grey Nurse Sharks, giant Queensland groper and a huge variety of fish life. 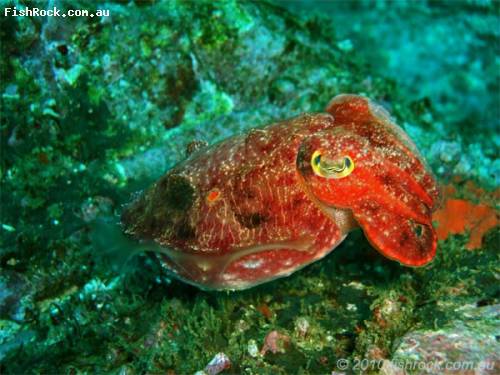 The craggy island of Fish Rock gives no indication of the splendor that lies underneath. At 120 metres long, and well known as one of the largest ocean caverns in the southern hemisphere, Fish Rock Cave has attracted divers worldwide. Enter the deep end of the cave at a depth of 24 metres where thousands of bullseyes hang suspended. Swim into the tunnel entrance over huge wobbegong sharks and a large bull ray resting on the bottom. You’ll pass by clusters of live cowry shells, a large Spanish dancer, bryozoan lace coral and sea cucumbers to name but a few.

Ascend up one of the two vertical chimneys with only your torch light piercing the darkness, and see the many glowing eyes from hundreds of painted crayfish following your progress. At the right time of year, giant cuttlefish lay their eggs in the cave and the huge male is a spectacular sight with his colours flashing. Pop up into the bubble cave for a quick chat before emerging into the light zone.

The shallow end usually stops people in their tracks. The deep blue opening is a vision people have seen in many photographs, magazines and books and it still doesn’t prepare them for the spectacular beauty. Silhouetted in the opening are thousands of bullseyes, gorgonian coral fans, trumpetfish, black cod and many other species of fish. During most of the year grey nurse sharks are regularly sighted silhouetted in the opening making it a photographers' paradise. There are also nudibranchs, bright orange zooanthids, moray eels and anemone and clown fish.

I have dived Fish Rock Cave thousands of times and love diving in and around Fish Rock.