The wreck of the HMAS Swan was artificially sunk in 1997 and makes for an excellent dive.

Best dive-season / How to get there: Get down to Dunsborough and book with a dive shop to go out. She is located approx 1.5 kms North (0 deg) from Meelup Beach. There are several buoys to mark the wreck.

This dive site is an awesome dive. The HMAS Swan shipwreck was sunk purposely in 1997 for divers, the wreck lies upright in 31 meters of water (she sits on her keel with about a 10 degrees list to port), over 113 meters long and over 20 meters wide. One dive is certainly not enough to fully explore the wreck. The average visibility in this area is 18-25 meters, although it was only about 7-8 meters when we went.

In the short time the Swan has been down, she has already become home to 80 different species of fish. This is a dive not to be missed while you are visiting Western Australia. The wreck is fairly safe for penetration as holes have been cut in the hull to the point that at almost no time are you not within light entering the wreck, this does NOT mean that you can take it less seriously as within the wreck it can be easy to forget your no deco time and you can still get disorientated too, so as with all penetrations treat it seriously. 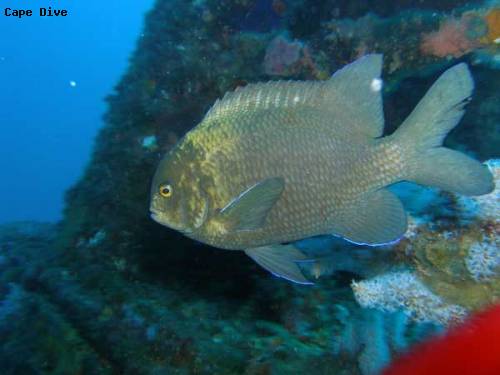 The HMAS SWAN is a River Class Frigate Destroyer Escort built on 16th of December 1967, launched at HMA Naval Dockyards in Williamston, Victoria. Twenty months later on the 20th of January 1970 the HMAS SWAN was commissioned and ready to serve the Australian Navy. It served for 26 years with the Australian Navy travelling to Australian and international ports mostly in South East Asia, She also served in the Vietnam War escorting the Troop Ship HMAS Sydney and in September 1981 she also visited China.

Before the SWAN could be scuttled the environmental and diver safety had to be satisfactory. One of the biggest dangers was the miles and miles of cabling which could have fallen down creating a dangerous web of entanglement for divers. Diver access holes were cut so there are entry and exit points in all areas of the ship. The engine room and the boiler room had to be closed off due to possible entanglement hazards. The biggest environmental problem was the removal of oil and hydraulic fluid in the engine and boiler rooms and the mechanics of the gun turret.

On December 14th 1997, the HMAS SWAN ended her 26 years with the Australian Royal Navy. Her final resting place now lies in a bed of sand, in 30 meters of water, off the South West Coast of Western Australia in Geographe Bay, creating an artificial reef for corals and marine life.

The SWAN has now become a popular dive site; being the first ship in the Southern Hemisphere to be sunk as a dive wreck. Measuring 112m in length, 21m in height and 13m in width; situated 1.3 nautical miles off Point Piquet, Meelup, she is truly a spectacular site. There is an abundance of sea life taking advantage of the SWAN as their new home. Batfish swim around the Crow's nest; large schools of Bullseyes inhabit many rooms, with King George Whiting and Brim swimming around the hull. The inquisitive Samson Fish give divers an added bonus when looking around the wreck, along with Dhufish, Shaw's Cowfish, Blue Devil, Sweep, Talma; the list goes on. Not only is there fish, plant life is starting to grow on and around the wreck with several Flowering Soft corals, Sea grass, Hydroids and Coral Formations. There is more and more growth every year.