Diving at one of the best wreck dives in the world, the SS Yongala Wreck

While there are many shipwrecks along Australia's Great Barrier Reef, one of the best wreck dives is this one, the S.S. Yongala. This ship, made out of steel and timber, sank during a cyclone just about 60 kilometers from Townsville at Cape Bowling Green, taking the lives of all 121 passengers. The wreck lies in the middle of a flat and sandy shipping channel in about 30m of water. You can still see the aft, the rudder and forward masts, engine and steam rooms, toilets, port-holes and most of the name - Yongala - even after almost 100 years in the water.

The wreck is covered in brightly colored soft and hard corals, hydroids and sea fans. Because it is the only hard structure for about 20 kilometers in all directions, it's an attraction to large pelagic like sharks, barracuda and other large fish that have made the wreck their home. In 2001, the groper family came into the news, when the youngest grouper became aggressive. He placed his mouth around one diver's neck and could have broken it with just a simple move. The diver was lucky and only has some teeth scars and bruises.

It is considered as one of the best dives in the world. One you shouldn't miss and when on a trip to Australia, it is definitely a must see. 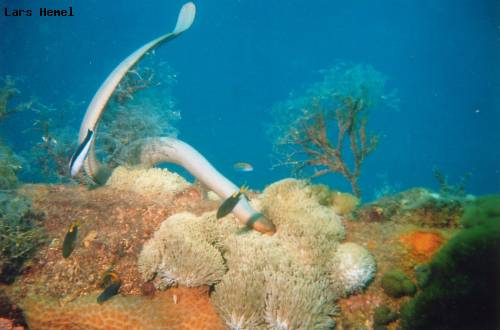 Simply FANTASTIC, one of my best dives ever, I didn't even have the time to look at the wreck itself, as there were so many fishes ! And seasnakes, turtles, eagle ray, giant cod etc...Just do it !

The SS Yongala is a passenger ship that sank on 23 March 1911 off Cape Bowling Green. It was on its way from Melbourne to Cairns when it got trapped in a cyclone. All the 122 people on board of the Yongala died. In 1958 the wreck was discovered south of Townsville and not long after the discovery it became a major dive location and tourist attraction for Townsville. The SS Yongala is 109 meters long and is laying approximately 22 km east of Cape Bowling Green and 89 km south east of Townsville. In the more than 90 years since the SS Yongala sunk the wreck has become an artificial reef and houses a diversity of marine life.

YES probably the best wreck dive in Aust, the Perth/brisbane are new wrecks in comparison, marine life is bountiful, being a cleaning station, lots eagle rays, turtles olive sea snakes ect if you do the fast boat from eyr wear a kidney belt, may be fast but its rough when the seas are up.

The S.S. YONGALA sank in a cyclone on the 23rd March 1911 and remained undiscovered for almost 50 years, not being positively identified until 1958. The wreck now lies on its starboard side in 14-28 metres of water and at 109m long is the largest and most intact, historic shipwreck in Australian waters.

She sank just 12 nautical miles off the coast of Cape Bowling Green in the Great Barrier Reef Marine Park with the loss of all 122 passengers. Exactly what happened we will never know – although research indicates the vessel was steaming, the fact no life rafts were found indicate the loss of the Yongala was sudden and tragic.

It has now become known as one of the world's top wreck dives and certainly one of Australia's best dive sites due to the prolific variety of marine life. Giant Queensland gropers hang beneath the stern while schools of trevally and cobia congregate around the depths of the wreck. Queenfish, barracuda, turtles, sea snakes, eagle rays and clown fish are just some of the other incredible life inhabiting the coral encrusted structure.

The Great Barrier Reef is the most bio-diverse ecosystem on the planet including over 1500 species of fish and 350 different types of coral. The Yongala wreck has now become an artificial reef with more varieties of coral growing on it than most natural reef systems. It is also host to a huge diversity of pelagic and reef species found in the Coral Sea. You will see more fish in one dive on the wreck than ten on the reef. It's certainly a dive experience you will never forget.

Blew me away, saw everything you could wish to see, have dived some stunning places since but nowhere comes close. Awesome.

This was my first really free dive on the Yongala wreck. I did have to help with cleaning gear, setting up weight belts, serving some snacks, doing some paperwork on safety sausages and other small activities on the boat, but the dive was completely without any task at the back of the group.

The dive was wonderful. A lot of current on the way back and I completely missed the name Yongala and the toilet. I dove with Sarah and Elenor.

Great dive at the Yongala wreck again. The weather was rough and I got seasick on the boat, so I was glad to be in the water. We spotted an eagle ray, big turtles and the familiar groper family who were not in an attacking mode today.

My last specialty on my PADI Advanced Open Water course was a wreck dive, luckily enough also on the Yongala Wreck.

It was a brilliant dive. We saw the Yongala toilet, the name Yongala on the side of teh wreck and lots of other things. Realy spectacular and making it my best dive so far. Everything went fine, two safety stops, no equipment problems; actually a real relaxed dive.