Bait Reef is a shallow dive known for ledges and bommies full of marine fish.

Bait Reef is situated close to shore just off historic Trial Bay Gaol. The reef is approximately the size of two tennis courts and lies lengthways parallel to the shore with two or three small bommies lying next to the main reef on the landward side. Bait Reef can usually be seen easily from either shore or as our dive boats drive by on their way to our other dive sites as she has a max depth of 10 metres on the surrounding sand and comes up to approximately 5 metres from the surface in her centre.

A perfect dive site for photography because of the depth and variety of aquatic life Bait Reef is popular with our regulars. Highlights include the resident Green turtles that can be found often in abundance here. Also look under the small ledges for Pineapple fish and Firefish. Covered in most part by abundant growth, do take the time to look closely at the weed - home to anglerfish, numerous varied nudibranches, sea hares, juvenile fish and molluscs. Bait Reef is a treasure trove of marine finds and with the shallow depth you have plenty of time to explore.

The Reef is usually swept by shoals of bait fish (hence the name!) and also schools of squid. Other visitors are Humpback Whales in season - often seen over the Reef during their annual migration up and down the coast - though very rarely spotted underwater whole dives can be made to the accompaniment of male Humpbacks singing.

In the calmest of sea conditions this can be dived from the shore but requires a rock entry and exit or a long swim around the break wall - also don't forget your dive flag on float as this area is very popular with boats and fishers. A great second dive or night dive location we often try to take divers who have done a number of days diving with us to this site as they always rave about it later. 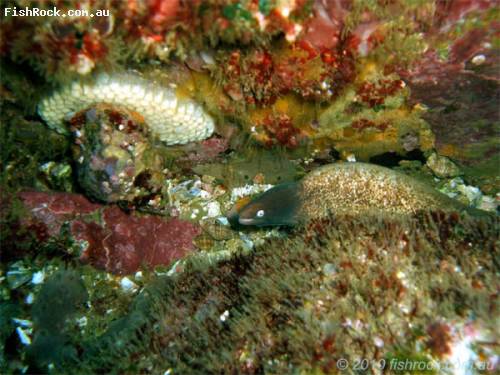