Shallow Black Rock is popular for its diving amongst many different kind of fish in all sizes and colors.

Black Rock is located just south of Smokey Cape lighthouse. Rocky crevices and resident turtles combine with tropical corals and thousands of schooling baitfish for a relaxing and interesting dive. The dive site at Black Rock ranges between 8 and 15 meters and on a dive you can sometimes see even more fish than at Fish Rock.

Yellowtail, seapike, silver sweep, pomfret, nannygais, bullseyes, dozens of moon wrasse, blue gropers and combfish follow you on your dive as you swim around this amazing site. The large resident turtles, egg cowries, lionfish, nudibranchs and wobbygong's make this site a photographer's paradise. Overall an excellent dive site, and it's depth is especially suited for second dives. 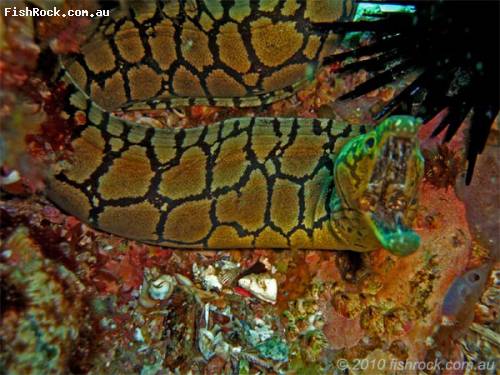 The starkness of these two black rocks above the surface gives no indication of the beautiful coral garden below. The two rocks are situated off Smoky Cape beach which sweeps southwards from Smoky Cape Lighthouse towards Hat Head in the south. Though there are two rocks the surge in the gutter between prevents safe passage through them on all but the calmest days. Also as a matter of safety we encourage diving within visual surface sight of the boat and therefore the skippers watchful eye! Usually this means Black Rocks is split into two different dives; a northern and southern route.

The centre of the natural bay formed by the two rocks are often used to begin this dive allowing divers to explore the bay up to the rocks and out to the reef edge. Close into the rocks you will see in around 6-8 metres small crevices and larger boulders which get smaller in size as you swim away from the rocks towards the reef edge on the sand (14-16 metres). A large part of the reef here is made up of large plate coral - Black Rocks is the southernmost point at which you will see plate coral growing in such abundance.

Everywhere you look you will see friendly moray eels, beautiful lionfish, obscure nudibranchs, feather stars, active octopus and juvenile fish darting in and around the boulders and hard coral. Take your time on this dive and ensure you look under the overhangs and in the cracks - you will be rewarded by the variety of marine creatures you see. The fish life at Black Rocks can be as abundant as at Fish Rock - look out for the huge schools of bulleyes and bait fish plus the tropicals adding dashes of colour. There are also small gutters or areas of sand in amongst the reef which are worth a closer look particularly to see (hiding just under the sand! numerous white-spotted shovel-nosed rays and also flounder. Bigger fish are also seen by divers at Black Rocks - Grey Nurse Sharks, large king fish and jewies are all visitors here.

A particular highlight at this dive site are the amazing egg cowries that live on the coral and rocks - look out for a bright white shell partially or almost completely covered by the black mantle - the small white dots on the mantle are reminiscent of diamonds on black velvet! Another top spot are the resident loggerhead and green turtles that may join you on your dive - particularly look out for the large three flipperred loggerheads that are resident close into the rock. Plus if you have the time on your dive do check the sand edge of the reef for very large black bullrays.

This dive is a popular alternative to the dive sites at Fish Rock and is suitable for all levels of diver. The bay is also a pleasant place to spend the surface interval and have a hot drink and snack!

Similar in topography to the northern side this side of the rocks offers greater depth at the reefs outer edges - down to 20 odd metres in places. Again Fish Rock Dive Centre usually begins the dive in the centre of the small bay created by the two rocks. Large boulders and small sand gutters create habitats for numerous juveniles, octopus, egg cowries, lionfish, scorpion fish and inquisitive eels. As you swim along the main rock keeping the rock to your left look out to the ocean to catch a glimpse of more of the large visiting pelagics - king fish, jew fish and occasional bronze whalers!

Turning back towards the boat keep an eye out for the turtles that make this area their home - sometimes hard to spot through the myriad fish life that gets in the way! Huge schools of pomfrets and bulleyes are well known here with passing schools of long tailed banner-fish making regular appearances. South Black Rock is again a popular alternative to the dive sites at Fish Rock and suitable for all levels of diver. Snorkelling is popular during surface intervals.